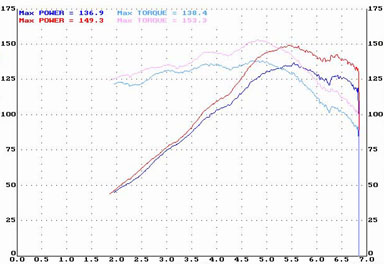 Thanks to Dan Dunhem's help and Superior Automotive, I have been able to give much more detailed information about the dyno runs.  I have also slightly changed the manner in which I "manipulate" the data.  Information about the various dyno tested mods are below.  Go to the bottom for just about every chart you may possibly want and not want.  But don't miss the info in between.

Looks like the major reasons for the dyno are out of the way now.  I have presented the information as unbiased as I could and also attempted to gauge each bolt-on part's ability to benefit the overall package.  Of course, I was not completely successful, but I am not likely to have my exhaust unbolted anyTime soon for dyno purposes.  In any case, enjoy the results and if you have any questions, just drop me an email.

I will be creating another chart giving exact figures of the actual gains.  Stay tuned for the chart.

More dyno runs than you can shake a stick at! -> (click here)

The multipliers above are completely arbitrary.  They are based on the stock runs of myself and other PGT owners.  Dynojet data was use in the following manner:  Smoothness was set to the default value of 3.  Temperature/pressure/elevation correction was left on.  One more note:  Superior Automotive does NOT know what altitude they are at, which means all of the figures are slightly deflated.  I estimate that elevation is roughly between 100-200 feet above sea level.

Run #2 was done as a quick test to gauge the performance of a free flow air filter.  Attaching a cone filter directly to the car's VAF as the only intake mod should be discouraged, however.  Without some way to get fresh/cold air to the filter, you will only hurt your car's performance.  The dyno run was conducted with the hood open and a large fan blowing on the car.

Note that Runs  #1 and #3 were both stock.  The difference is what is not bolted on.  What's the difference?

All references to power increases/decreases are listed in terms of wheel HP and torque over the "New stock baseline."  Hood was up and a large fan was blowing on the car for back-to-back runs.  Enough Time was alloted between the runs to cool the car reasonably.


Better/synthetic fluids  ($30):
The increase has been 3.8 HP and 1.5 lb-ft of  torque for just changing the fluids.  If your stock plug wires are in good shape and you're already running synthetic oil, then the gains in power may be strictly due to the better MTX lubrication and cooling.  I'm guessing that the synthetic MTX oil had the biggest impact.
* The average gain over the power band between 3000-6800 rpm was roughly 2 HP and 2lb-ft.

The Unorthodox pulley ($160):
The underdrive pulley seemed to provide no extra power over the stock pulley.  So what are its benefits if it doesn't seem to contribute horsepower?

* Less inertial mass:
Takes less energy to rotate the crankshaft due to less weight attached to it.  Theoretically that means the engine reaches redline faster than with a stock pulley.  1000-7000 rpm in 8 seconds rather than 9 seconds would still translate to faster Times.
* Longer accessory life:
Since the accessories are spun slower than normal (at redline they only spin at around 75% of what they used to), this means that the components will last longer because they aren't as abused.

* New addendum to the UDP dilemma:
While before I reported that the UDP seems to have no benefits, I feel that I must modify that statement slightly.  While in the process of comparing runs with others, I did note that while I did have one of the highest power curves, the UDP was notably missing from several of the cars, which leads me to believe that there may be some benefit.  Then I see Ntruder's curve and think maybe that I'm not wrong about the UDP doing nothing.  Stay tuned for more.


What the numbers mean:
The changes in the power curve are pretty dramatic.  The various items were really complementary and the sum of the parts is definitely not as much as the whole.

The Hotshot intake has really contributed to the low (2250-3250) and high (5500-6500) ends of the stock exhaust power band.  On the Borla exhaust, the Hotshot intake really proved its value.  The power band was broadened over the whole rev range instead of just at the low and the high side.  PGTs have a tendency to have a dip in power right at 6250 rpm (corresponding to the opening and closing rpms of the VRIS in our cars) which the Hotshot managed to mask well on the stock exhaust.  The dip is almost completely forgotten.

By itself, the Borla most improved power in the mid (3250-6250) range.  In the low end, there were actually a few dips where the power curve fell slightly below the stock curve.  The overall increase in area of the curve still indicates that the Borla is delivering extra horses, but nowhere near as many as some have claimed (8-15HP exaggerations).

The Unorthodox pulley was a bit of a disappointment for me, but after scrutinizing the comparative power curves, one of the plots shows a distinct improvement in the low end (2500-4000rpm) of the power band.  This may correspond to the theory that it is most effective under WOT (wide open throttle) when the crankshaft is spun to its maximum power faster than normal.

Bottom line:
The Hotshot Cold Air pipe is by far the best bargain.  Expect to get much more bang for your buck.  This isn't saying that the exhaust doesn't have its place.  Combined, the two add a fat overall addition to the entire range of the power curve.  And once you start adding crazy power like forced induction, I'm sure that a mandrel bent exhaust will almost be mandatory, but for the stock PGT driver looking for a cheap mod, $$$ is best invested in a Hotshot pipe (This only applies to manual transmissions.  Automatics cannot use the Hotshot Cold Air pipe)..

With the addition of the headers, the combined gains have been very positive.

Due to the sheer number of dyno runs, I had to put them into their separate pages.  More pages to be put up soon!

All "vs." runs are presented in raw form, which means no smoothing and no correction.  Due to the sheer number of variables present when making runs, I present the data "as is."  Take the data with a grain of salt.

There is one other thing...  I've made the statement that the 94+ models consistently outpower the 93s in low-end torque.  See for yourself if this statement is true.