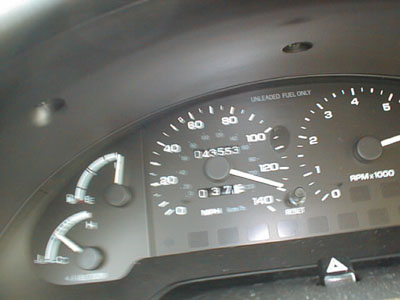 "...roll down the window and let the wind blow back your hair. Well the night's busting open these two lanes will take us anywhere." - Bruce Springsteen, Thunder Road

Tour my car.
What makes it tick (but needs updating!).


11/04/2004: Another update on what's been going on. Yes, over five years since I've updated my car website and I still own the same two Probes and drive them daily. Well, mostly.

The 91 PGT has been in the garage now undergoing some extensive overdue maintenance, not the least of which is the dreaded manifold exhaust leak. Out of the six manifold studs, only 3 were properly secured on one side of the manifold. One hole was missing a stud completely, another had a loose stud using an oversized nut as a washer/spacer, and the third stud snapped off during removal. Thank the Twin Gods Horsepower and Torque that they bestowed Mankind with EZ-out bits and Helicoil inserts. There's a cautionary tale in here about purchasing used cars of questionable origin...

But I digress. The cars are otherwise running quite well despite their age and mileage and I intend to keep them for as long as possible. Not just because I like them, but because the longer I keep them the longer I can put off facing new car payments. The longer I don't have car payments, the longer money can go elsewhere, like house payments and other debt.

The Probe performance mailing list is now long dead. The fineprobes maintenance/general list is in a coma and I'm merely its caretaker. Any useful information you require regarding the Ford Probe or Mazda MX-6 can be best found at the Probe Talk forums or the Mazda MX6 website. You'll find me almost exclusively on the Probe site but both are the definitive resources for this car.

Such is the evolution of the internet. Bulletin boards are now once again gaining popularity while mailing lists are fading out. It's funny how dial-up bulletin boards were the big thing in technology back in 1987 until the internet really killed those back in 1995 or so, and here we are back to them again.

I plan to start updating this page again somewhat. If anything I'll be stripping it down as most info can be found online at Probe Talk. Or maybe I'll leave it up as a reference for anybody who cares.

And yes, I am still a member of the So Cal Probe Club. Apparently I'm the only remaining (semi) active member left from the original founding group so I guess I have somewhat of a responsibility to represent those guys. After being largely absent for the last four years or so, I decided it wouldn't kill me to be a part of the club a little more. Much credit goes to Damon for being such an important part of keeping the club going as well as the Probe Talk forums.